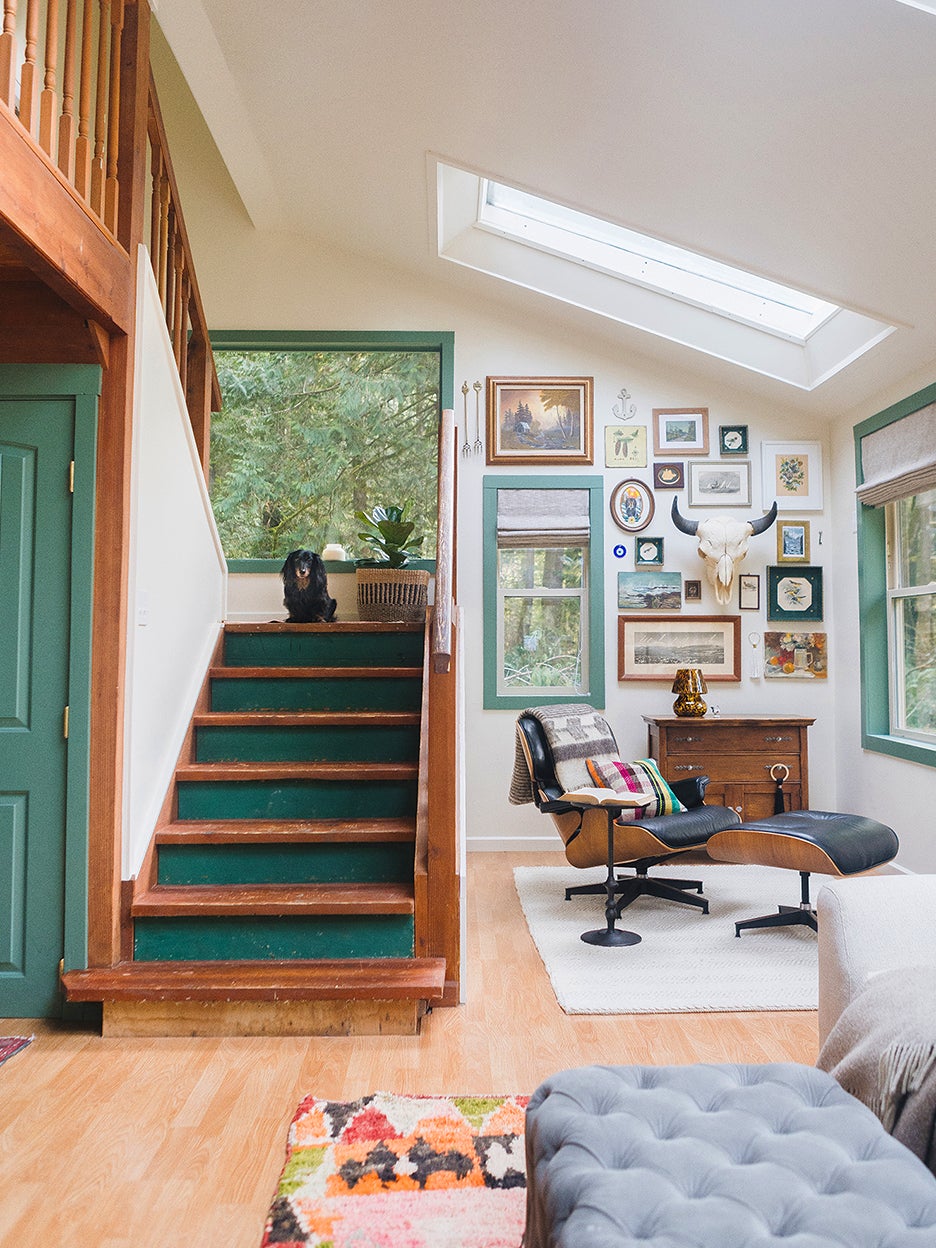 Don’t knock painting by ring light till you try it.

Joanna Hawley-McBride isn’t one to shy away from adventure—the blogger, who runs the lifestyle site Jojotastic, and her husband, Sean, regularly head up to Washington State’s North Cascades mountain range to rock climb, ski, and hike. So when the pandemic hit and the couple was stuck in their 640-square-foot one-bedroom in Seattle, they started to go stir-crazy.

“We had always wanted to look at real estate up in the mountains, but never found the right home with the right square footage and amount of land,” says Hawley-McBride. But as luck would have it, they came across a 1980s cabin on two acres with “amazing exposed timbers” and one-of-a-kind charm. “You could tell that whoever built it put a lot of care into it,” she adds.

Within the week, they had settled on buying it, even though it would be a massive DIY project. There was carpet everywhere; writing carved into the walls from the previous owner’s children; and, worst of all, the smell. “We knew they had many pets but weren’t emotionally prepared for the state they left the house in,” she says. “We have been deep cleaning for seven months.”

Then there was the challenge they could have never anticipated: Mid-remodel, 70-mph winds rolled in, a tree fell on the house, and electricity went out for miles, leaving the duo without power or running water for days. They ended up painting in the dark using a ring light and photography equipment and cooking meals on a propane stove. “Despite all the craziness of this renovation, we are so happy with how the rooms turned out. It’s really set the tone for the rest of our projects—and it’s one more adventure that we can laugh about together,” she says.

When in Doubt, Match the Landscaping

One of the most noticeable differences made to the home—originally a “toothpaste blue with varying shades of pastel”—is the fresh cream walls and green trim, painted in Dunn-Edwards’s Ecological. The couple coated the window and doors, the first-floor bookshelf, and even the closet interior in the verdant shade. “Because our Seattle house was so small, we chose a very specific unified palette, but with this one, we could go for color,” says Hawley-McBride. “I fell for the swatch and knew it was going to be amazing to frame the views on our property.”

Small Swaps Can Change Everything

Without an official mudroom, the front closet works hard as a landing place for outdoor gear, dog leashes, and more. The couple added a bar for hanging coats and a standing shoe rack, then adjusted the height of the neighboring shelves to fit wire baskets for corralling scarves and hats.

The bookshelf was a similar game of storage Jenga. “Before, the cubbies weren’t equally spaced and it looked chaotic,” remembers Hawley-McBride. They evened out the layout and removed one nook entirely. Now the built-in fits quirky miniature paintings, her bridal bouquet, and a baby photo of Sean alongside their collection of coffee-table tomes. “It’s been so fun showing them off now that I finally have the space,” she says.

Who Needs Windows When You’ve Got Paint?

The dining room connects the kitchen to the rest of the living space, yet it was originally the darkest spot in the cabin—Hawley-McBride likens the original vibe to a cave (it doesn’t have any windows). But a 15-foot ceiling and charming timber beams signaled there was plenty of potential. Painting the worn wood paneling in between the supports white instantly lightened things up, as did suspending a George Nelson Saucer Bubble pendant light a touch lower than the previous fixture.

“A lot of the decisions we made are based on practicality with summer and winter temperatures,” explains Hawley-McBride. Fans along with a propane gas stove in the dining room and wood-burning stove in the living room help regulate the cabin’s climate whatever the weather. In the living room, they went one step further, installing insulated window shades, a Blinds.com Black Friday purchase. “I found out about them because my good friend Anne Sage uses them for all of her interiors clients,” she says. They doubled the cost of the project, but have a huge impact in keeping cool (or warm!) air inside the house.

They took the same detail-oriented approach to the floors, updating them with layers of sound-transfer prevention and insulation, as well as a gorgeous green and pink vintage rug for extra cushion. “Because there is a concrete slab under the room, it can get cold,” explains Hawley-McBride.

The couple is nothing if not prepared. “When we ran out of painter’s tape, we had to drive an hour to get more—now I have an entire bin of it!” says Hawley-McBride. “We know more about what we should have on hand during the winter months for emergencies, but also what to have on hand when renovating a space in the middle of nowhere!”